Professionally, Louise was the author of ten books including The Zoo Room and Secrets in the Tingle Forest, which won the Western Australian Young Readers Book Award and was shortlisted for a Wilderness Society Award. Louise was the founder of the Mundaring HeARTlines Festival, which showcases the art of children’s book creation through exhibitions, workshops, talks and demonstrations by many WA authors and illustrators.

Louise placed particular importance on the mentoring of new writers and the mutual sharing of information and support. She worked tirelessly behind the scenes to help plan our first Conference and Rottnest Retreat and, as much as her declining health allowed, contributed to the smooth running of subsequent SCBWI events. Louise was instrumental in our 2011 "SCBWI cow" project, including the naming of the cow – "Books Moove Me" – and also wrote an article which was published around the world via the international SCBWI Bulletin.

The Louise Schofield Award is presented biennially to a member who has made a significant contribution to the children’s book writers' and illustrators' community via their service to SCBWI West and we are delighted to announce that the 2013 Award has been made to Dianne Wolfer.

Dianne has been a tireless supporter and advocate for the sector over many years, mentoring and supporting pre-published authors and giving generously of her time to the SCBWI West team.

Dianne led SCBWI West for six years as the Regional Advisor; during this period she oversaw our first conference, organised four overseas adventures to Rottnest Island for our annual retreat, and forged firm partnerships with key organisations across Australia and Singapore. Dianne also worked tirelessly to help showcase SCBWI West creators at the Bologna Children’s Book Fair. All of this in between authoring numerous books!

Louise's daughter Zahra Hilton was on hand at our State Library meeting to make the presentation.

Congratulations, Dianne, and many thanks for your continuing hard work, from a grateful SCBWI West! 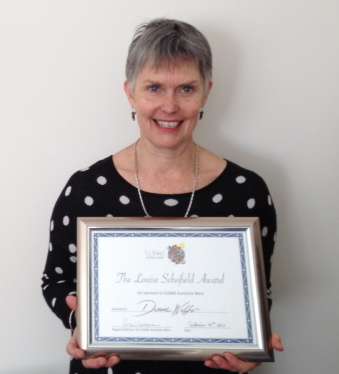